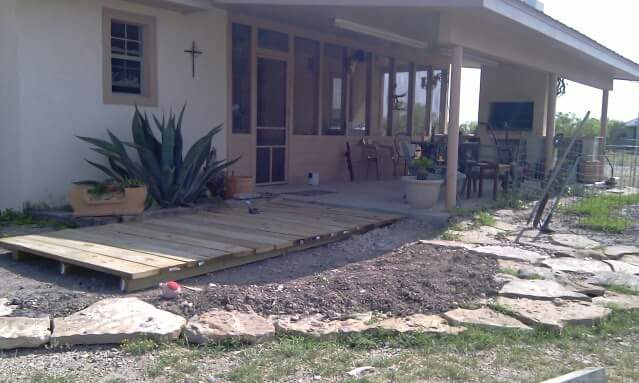 Initially I hated the property.  I was living 8 hours away in El Paso and my husband’s estranged (strange) cousin was sleeping here on my treasured leather love seat. It was made from American leather, where we have free range cattle, and the leather is cheaper than European leather because of the “flaws.”  The flaws referred to markings in the leather from cattle branding, or scars created by cows leaning against barbed wire.  My love seat actually showed the brand of the ranch my sofa was raised on and I hated cousin Geronimo laying on it shirtless with his big sweaty belly and stinky, old feet.

My husband loved the property and was frustrated by the dismay in my face every time I looked at the dusty gravel yard and scrubby surrounding trees.  I was an Austin girl and needed a lovely landscape for my soul to flourish.  Gardening was foreign to Orlando, but carpentry was not.  He built a three foot wooden fence that encircled the patio side of the house and constructed a 10 foot boardwalk to extend the concrete floor.

That tiny enclosure was enough inspiration to kick me into gear.  I wrestled the wheelbarrow over to the old original ranch house where I unearthed hundreds of pounds of flagstone buried a scant few inches under the surface of the old homestead.  Each rock weighed between 30 and 80 pounds, but I loving dragged each one into place, weekend after weekend trip home until I had built lovely rock paths all around the house. These stone sidewalks became natural borders to the multiple gardens that would spring up in the next few years.

As I struggled to find plants that would not just survive, but bloom and thrive in that unforgiving soil, I learned that “full sun” had a different meaning on the Mexican border than it did just a few hours north.  Plants, shrubs and trees that were lush and green in May  and June withered in July now matter how often we watered, and every year in August I would have a depressing brown landscape.  Even the native cactus would begin to wrinkle with dehydration, and the spindly mesquite trees would droop and fade.  We never fail to be amazed that a mesquite branch cut just a few minutes earlier, still sporting green leaves, will blaze immediately in a fire and quickly crumple to ash.

Every year by September my subconscious seeks vivid colors while I sleep, and my dreams play out in a Kodachrome world of intensely saturated colors.  It was when these dreams began that I finally understood why Mexicans painted their houses such hideous shades of turquoise and hot pink and filled their gardens with hand-painted tin sculptures and multi-faceted gazing balls– they were frustrated gardeners, driven to insanity by the unvarying shades of brown as far as the eye could see.  Even the children, brown skinned, brown eyed with dusty brown feet.  These children, soulful and beautiful in a northern backdrop, here just blended into the bleakness.

Even now, after 4 years of fertilizing dirt, mulching gardens, hanging shade cloths, building pergolas, and constructing water features, we understand the gardens will undergo a few dormant months in late summer before the merciful shortened days of October allow the leaves to reawaken, just as the fall rains begin.  I still prefer the brutal heat of the south to the bitter winters of the north.  The bleak Missouri months of gray skies used to drive me into depression that threatened to shackle me permanently.  It’s rare down here that we pass a day without sunshine, the one element that never fails to bring me joy.

When my husband first proudly showed me the little ranchito we were buying, my anticipation dissolved into bitter disappointment.  What he described was twenty acres just outside of town with a rustic hunting cabin and a pond.  What he revealed was a 900 square foot cinderblock building in a two acre caliche parking lot.  No vegetation save scrubby mesquites and prickly pear cactus.  The land was flat and uninteresting, and the pond was on the far edge of the property, out of sight of the homestead.

Someone had tried to make the little house marketable.  Rustic saltillo tile, the red clay Mexican tile that builders traditionally used for outdoor settings, covered the floor of every room.  The spartan kitchen had new cabinets, even if they were contractor grade.  The single shower stall actually had been tastefully custom tiled.  There was a large covered patio, but the roof sloped down to just under six feet, and my six-foot-three husband had to duck his head to walk out into the barren yard.  It was a house built in another era, by people of a heartier stock than modern buyers seeking picture windows and plush cream carpets.

That notion held the first glimmer of appeal for me.  That this house was not fitting for some pasty-faced fancy pants, but required someone a little tougher.  A woman like me, whose first diet plan was managed by Marine Corps drill instructors, their mouths so close to my ear that spittle hit my cheek as they screamed, “You gonna eat that potato, Pork Chop?  Your ass is going catch on fire the way your thighs are rubbing together!”  I had showered with cold water the first three months after high school, and had been yanked out of the port-a-john with my pants around my ankles if I took longer than a ten second countdown to handle my business.  That training formed me.  I was definitely more resilient than local princesses.

We walked around the property so Orlando could show me what the acreage had to offer.  A few hundred yards away was the old ranch house, the original homestead for the overall ranch.  Originally spanning thousands of acres, the ranch had been duly purchased and diced up into ten and twenty acre lots by a rich real estate investor up in Austin.  The old house had been built to last,  showcasing the pier and beam style of a typical American turn-of-the-century farmhouse.  The roof had a steep pitch, and the tin, more than a hundred years old, still did not leak.  As we stepped up onto the covered, wrap-around porch,  Orlando pointed out the electric and plumbing mounted on the exterior of the house, because those luxuries had been added sometime after the house was built.  The frame of the old outhouse still stood.

From there we walked to the old horse barn. It was little more than a lean-to stall, but the cedar posts sunk deep in the dirt were still true and strong after this many years.  In the surrounding brush we could see a series of waist high cedar posts in a seemingly random configuration.  Later, a coworker of mine will describe those posts from memory.  They were the last remnants of the sheep corrals from the 1970s, when Joe Luis had worked as a teenage migrant worker shearing and rearing sheep.  Staring into a distant memory, Joe Luis walked me mentally through most of the twenty acres, explaining the various landmarks we had wondered about.  The old concrete slab once held a bunkhouse for all the migrants.  The metal pole with the box because the boss later added lights.  The green lines of vegetation grew where old water lines used to run water from the house well out to the cattle troughs.  His memory of fifty years ago was vivid and unwavering.

That first day, on a piece of land that felt like the middle of nowhere, we could see the footprints of men that had stood here before us, back in the days before our grandparents were born. That was the day we began to integrate our modern lives with the vestige of the rough and tumble life of the American west.